“This letter is to the American Psychological Association (hereafter referred to as APA), and to all professionals in the field of psychology. This letter calls upon APA and professionals who adhere to the APA Code of Ethics to act in a manner that is ethical and consistent with that Code of Ethics. Two recent APA documents are relevant to this call to action. They are, the 2006 “Resolution Against Torture and Other Cruel, Inhuman, and Degrading Treatment or punishment” (hereafter referred to as 2006 Resolution), and the 2007 “Reaffirmation of the American Psychological Association Position Against Torture and Other Cruel, Inhuman, or Degrading Treatment or Punishment and Its Application to Individuals Defined in the United States Code as “Enemy Combatants”” (hereafter referred to as 2007 Resolution). With fervor, we are advocating for people with autism, developmental differences, and mental health challenges; urgently entreating that they may be given the same respect with regard to human rights as alleged “Enemy Combatants,” or any other human beings. As professionals who adhere to the APA Code of Ethics, nothing less than an unprejudiced stance in this matter should be considered acceptable.

“Currently, children and young adults with autism, developmental differences, and mental health challenges are being treated in a manner that clearly meets the definition of Torture and Other Cruel, Inhuman, and Degrading Treatment or Punishment, as defined by the two previously mentioned APA documents. The Judge Rotenberg Educational Center (hereafter referred to as JRC) in Massachusetts has a long history of using electric shock, food deprivation and prolonged mechanical restraint, as well as other painful and dehumanizing aversive techniques.”

Please go to http://disabledsoapbox.blogspot.com/ to read the letter in full and add your support. Meanwhile, anyone interested in debating with Matthew Israel should visit the Justice, the independent student newspaper of Brandeis University. Nathan Robinson from Brandeis Students United Against The Judge Rotenberg Center has written an opinion piece about the JRC that has provoked responses from Israel and equally vigorous replies from Nathan and others.

I am familiar with two studies that make a serious attempt to estimate the costs of autism – one in the USA and one in the UK. These figures look quite alarming: 3.2 million US dollars or 2.4 million UK pounds over a person’s lifetime. The UK figure is used to argue for an increase in our low level of funding for autism research. The US figure is used to defend their significantly higher level of spending. While I support the need for more funding for autism research I have some problems with the way these figures are arrived at and with the way they are used.

These lifetime costs are sometimes used alongside estimates of annual costs to the economy. In the USA this works out at 35 billion dollars. That sounds even more alarming until we remember that

More than 50 million Americans experienced a medically treated injury in 2000, resulting in lifetime costs of $406 billion; $80 billion for medical treatment and $326 billion for lost productivity.

Regarding the figures, the US study assumes a roughly 50/50 split between severely and mildly affected individuals as defined by their monetary cost to society. The much higher figure for average lifetime costs in the UK may be a reflection of the more generous provision of our welfare state. It is also based on an outdated  75/25 split in favour of severe autism. [3 million UK pounds versus 750,000 UK pounds] Epidemiological evidence suggests that between 15 and 20 per cent of autistic individuals are also mentally retarded. These are the ones who are not only unlikely to work but may also require lifetime care in some sort of group home or supported living arrangement. That is the inverse of the UK assumption. So, on closer examination, maybe the figures are not so alarming after all.

We also have to offset the figures for severe autism with the similar numbers of autistic individuals who may eventually become “indistinguishable  from their peers” at least in respect of their need for services and support. Tony Attwood (slide 13) argued that maybe 20 percent of autistic children move “up” and possibly “off” the spectrum over their lifetime at the NAS International Conference in London in 2005. And recent research on diagnostic stability tends to support him. 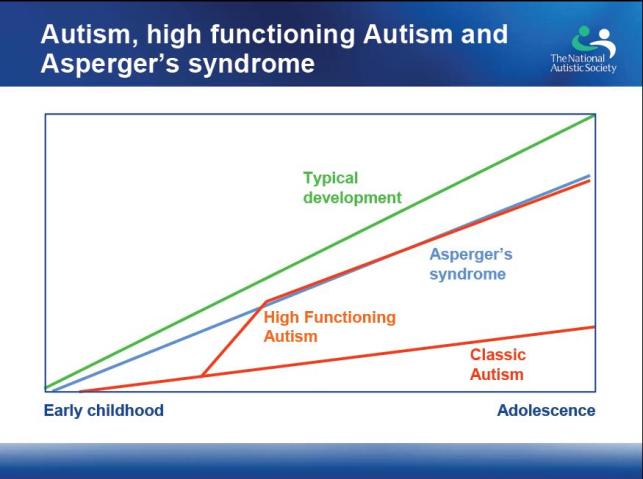 This found the following lifetime costs.

If you add the totals for four children, one each with MR, CP, hearing loss and vision impariment, it is very close to the alleged cost for a single autistic child! Someone is egging the pudding here!

Some of the elements within the figures are open to question. The US figures include 200,000 US dollars for ABA included in medical costs alongside 150,000 US dollars for education. Are these actual or notional figures? How many autistic children get ABA? How many get additional funding for their special educational needs? I have met very few prents who are satisfied with the level of provison for their autistic child.

1.8 million US dollars is almost equally divided between indirect societal costs attributable to the autistic person and  indirect societal costs attributable their carers. This seems to be almost entirely based upon loss of earnings and lost productivity.  But where are the measures that account for the positive impact of autism on the economy in terms of employing such a vast array of therapists and stimulating so much research into the human brain with unquantifiable impact on the whole area of neurological reasearch? I could also find no indication in either study that that they had attempted to factor in the positive contribution that autistic people might make to the economy.

Yes we do need more money for autism reasearch. But we also need more money for autism services. Presenting autism as a drain on the economy to frighten governments into funding more research into possible prevention and cure does nothing to help existing autistics and their families find support services in the here and now. And if the lifetime costs are so high where is this money going? Why are autistic people and their families so often left leading miserable lives?

If ABA and education do cost a combined 350,000 US dollars for every autistic child why not just write a cheque on the day of diagnosis? Let us see if the parents can spend it more wisely and more productively than the state. At the very least there would be a saving on lawyers fees (on all sides) for contested IEP meetings. And if it costs society 1.8 million US dollars in lost productivity for autistics and their carers just put half a million dollars in trust for every autistic child on the day of their diagnosis. At 5% interest that should yield around 1 million US dollars over 15 years. If we are going to spend so much money on autism, let us spend it effectively.

Joseph blogged the US study a year ago. Please read “Debunking the costs of Autism.”

There is a new blog on the block. Autism News Beat opened with this.

“I’ve started this site as a resource for journalists looking for accurate, evidence-based information about autism. I plan to review and comment on print and electronic coverage of autism, and interview journalists, editors, and others to gain their perspectives on this much reported but little understood story.”

The second post seemed to recommend the evidence based intervention of ABA over stem cell therapy. In fact the evidence base for ABA is open to question as Michelle Dawson was quick to point out. Her blog, The Autism Crisis, is a useful source of well referenced criticisms of ABA. I suspect that Autism News Beat was probably so impressed by a news report which for once clearly rejected biomedical interventions, that they decided not to highlight the controversy surrounding  ABA. This is akin to backing Stephen Dawkins in an argument against  intelligent design while deciding not to mention his disagreements with fellow evolutionist, Stephen Jay Gould. Disputes within the evolutionary camp are of minor importance compared to the gulf that exists between us and the creationists. Similarly the differences that exist within autism science are clearly of a different order to the differences between autism science and autism woo. [Pace Ms Dawson. Despite the efforts of autism curebies to reduce it to the level of woo, behaviourism is science based.]

Another news story centres upon the death of an autistic child. Hakeem was not subjected to life threatening interventions to “cure” his autism. He was loved and accepted by  a mother who removed him to America to escape the ignorance about autism that leads people to regard it as a form of demonic possession in Senegal. Similar ignorance exists in parts of America, sometimes with tragic consequences.

Hakeem was not killed by quackery. His death appears to have been a natural tragedy. His mother was so impressed by the progress he had been making following a programme of relationship development intervention that she is returning to Senegal and mortgaging her home to set up a school based upon RDI principles to help autistic children there. I have some doubts about RDI. It comes across as evangelical and expensive. There are no independent studies to support it. But it is better than exorcism or stem cell therapy and I send good wishes to Hakeem’s mother, Sabelle Jelani and to her proposed school.

Another news story centres upon Ralph Savarese, who adopted an autistic child. They apparently made great progress using facilitated communication. The media interest surrounds his book on the subject. I have not read it yet. But I am  thinking that this is yet another approach that helps some individuals but is hyped up as a solution for all individuals and falls into the abyss when these impossible claims on its behalf are dismissed.

Leaving autism aside, two other news reports caught my eye this week. One is about accepting people with Downs Syndrome  The early years of Downs Syndrome are reminiscnt of more recent attitudes to autism. In the year of my birth, 1952, the Guardian reports that parents of Downs children were told:

‘Not to worry, there are plenty of places for children like him.’ And she said, ‘In any case, they don’t live long.'”

Attitudes have changed, as the article makes clear.

“Or perhaps, as some of these stories may show, it could be because of a slow but growing understanding that a child born with Down’s syndrome today really does, perhaps for the first time, stand a chance of leading something remotely resembling a decent life.”

Downs Syndrome has not changed. But attitudes have. So Downs kids can now look forward to  decent life. As a consequence parents are no longer desperately seeking amniocentesis and therapeutic abortions in the numbers they once did. The level of Downs births is now constant. The level for positive outcomes is rising. Downs children are no longer routinely sterilized. Some of them may marry or have children.

I have seen severely disabled people in wheelchairs go potholing, abseiling and rock climbing. Usually this involves able bodied people and a lot of rope. There is no way they could do it on their own. Sometimes it is the same with sex. But helping a severely disabled person achieve sexual fulfillment involves a far more serious risk assessment than mountaineering. So full marks to Treloars College for tackling this and the Observer for a good job of reporting it. We have nuns arranging for a prostitute to visit a young man so he have sex before he dies, couples being assisted into position and them left alone, even marriage. And what about the possible offspring of these relationships?  If the love and care that facilitated their conception is transferred to their upbringing these will be lucky children.