A recent report in the Guardian provoked some furious responses in their  Comment is Free section. The story itself was a fairly innocuous account of another study by Simon Baron-Cohen in support of his theory that exposure to elevated levels of testosterone in  the womb carries a predisposition to autism. The furore came in response to the final paragraphs.

If it does turn out ultimately that testosterone is a causal factor in autism it may not be possible or even ethical to do anything to change it though. Previous studies suggest that the level is mostly down to the child’s genes. Researchers don’t know which environmental factors are important.

“There is a very live debate about whether autism should simply be recognised as an atypical pattern of development like left handedness which doesn’t necessarily need treatment,” said Prof Baron-Cohen, “It just needs to be recognised as different and maybe supported educationally but not cured or eradicated.”

This is my summary of the criticism generated by Simon Baron-Cohen’s statement.

The very idea! How dare anyone suggest that it is OK to be autistic? It may be OK for high functioning Asperger types and their parents. But what about those of us who struggle daily with severely autistic children who cannot speak, who tantrum and self injure, who cannot manage their basic physical needs without support  and are going to end up in life-long residential care?

And it seems a very reasonable criticism to make. If your child is miserable or angry and has little chance of living an independant life why shouldn’t you want to cure him? I know parents who are actively seeking a cure for their child, who also argue for more acceptance and understanding from society for autistic people. Some of these parents are very supportive of autistic adults who have made it plain that they do not want to be cured. When I questioned this, one told me that she respected ANON’s right to be accepted for who he was but her child could not make that choice. He was low functioning and non-verbal. She would love him to progress to ANON’s level and be able to choose for himself. Until then she was going to carry on looking for a cure.

Reading through the comments on the Guardian website one or two things struck me. Parents who were angry with Professor Baron-Cohen were at pains to emphasise the negative aspects of their children’s autism. mickeydolenz wrote

Then purelymedicinal, responded, declaring herself as Mrs Mickey D, and saying that she did not believe in a cure for autism because it was genetic. Then, when mogrammy intervened to argue that autism was a biomedical illness and the answers were all in Bryan Jepson’s new book mickeydolenz retorted,

mogrammy – no, sorry – that’s twaddle. It is a neurological condition – and that’s not theory, it’s fact. It’s utterly repugnant that snake-oil merchants like the one you cite make their living from the vulnerable.

Someone else chimed in to defend the Gluten Free/Casein Free diet and recommend Luke Jackson’s book on the subject. Luke is autistic. He is a clear example that Asperger’s Syndrome is not a mild form of autism. it can be just as severe in its own right as any ASD. The diet does not help with his autism. It helps with his food intolerances. mickeydolenz replied to this as well.

I utterly love my autistic children to pieces and I am at turns fascinated and depressed by their behaviour, as well as piss myself laughing with them. But I am ever curious as to how their brain works and how to unlock their world.

I am glad that mickey can laugh with his kids and that they are not “continuously frustrated and angry at the world  around them,” as he argued at the start of the discussion. This is not a cheap shot at mickey. At the start of the discussion he was angry at the idea that autism could be a positive thing. By the end he was arguing against the idea that his children’s lives would be forever joyless unless he bought the snake oil.

After someone posted an alert on one of the egroups on Yahoo the discussion was swamped for a while by mercury fanatics. But mickey, his wife and others kept the discussion going. They were asking questions and interested in each others answers rather than hammering home a point of view. I learned a lot from reading this discussion.

It confirmed that there are not just two camps – the curebie fanatics and the neurodiverse – slugging it out with each other in the blogosphere. The question is more complex than that.

I would like to think that those of us who advocate for autism acceptance are equally open to argument and discussion. We are not fanatics or timeservers. We are people who live and laugh and love and want, not better children, but a better world for our children. (with apologies to Paul Foot) 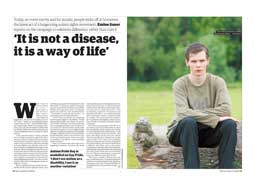 This article is in today’s Guardian.

It provides a useful introduction to the positions of some of the supporters of autism acceptance, including myself and fellow bloggers Kev Leitch and Larry Arnold.

Today, an event run by and for autistic people kicks off in Somerset, the latest act of a burgeoning autism rights movement. Emine Saner reports on the campaign to celebrate difference, rather than cure it.

It contains some really good insights from the people she interviewed. For example, Gareth Nelson (pictured above) of Aspies for Freedom says:

I don’t think you should cure something that isn’t purely negative, It’s the same as black people, who seem to be more at risk of sickle cell disease than white people but you’re not going to attempt to cure ‘blackness’ to cure sickle cell.

The only unfortunate thing about the article is that it does play up the role of Aspies for Freedom (AFF) at the expense of other initiatives. I was surprised to read that:

Nelson, with his wife Amy, who also has AS, is leading the UK’s autism rights movement.

And I am not convinced that AFF has 20000 members when the discussion forum on their webite has less than 6000 members and many of those are from overseas. This is unfortunate as one of the strengths of the emergent movement for autism rights and acceptance for autistic people is that there are many voices and all are free to explore important differences as well as points of agreement. As an example, Larry Arnold and I work together within the structures of the NAS and are in broad agreement on many issues. But we differ sharply in our attitude to the role of scientific research in autism.

I would also have liked to read more about Autscape. This event is unique in Europe. It takes its inspiration from a similar event in America called Autreat. Like the AFF, Autscape began three years ago but it makes no leadership claims. Instead it aims to:

But these minor criticisms should not detract from a very valuable article in which the author shows respect for autistic people and accurately reports their views.