Death of an Autistic Child: Chelation without Indication.

This is the title of an important commentary written by Dr Kimball Atwood about the recent decision by the Pennsylvania State Board of Medicine to take action against Roy Kerry, the doctor who administered the fatal dose of disodium EDTA to Abubakar Tariq Nadama. I am especially grateful to Dr Atwood for providing a link to the original order made against Roy Kerry.

At the time of Abubakar’s death supporters of chelation as an autism treatment made much of the fact that Kerry used the “wrong” sort of EDTA (Endrate versus Versenate). The Autism Research Institute (ARI) was also quite adamant that chelation was a safe treatment because it did not add toxins to the system, it removed them. It also pointed out that its DAN! protocol for autism treatment recommended transdermal and oral chelators as opposed to the intravenous method used by Roy Kerry.

“Respondent stated…that Disodium EDTA is the only formula of EDTA he stocks in his office”; he “admits that CaNa2EDTA is available but that he has never used this agent.”

So there is no question that he used the wrong chelator by mistake. As I argued in my previous post, Roy Kerry was using his chelation agent of choice. He knew what he was doing and even then he did it wrong.

The instructions that come with Endrate are crystal clear. The dose for children is 1 gram per 55lbs of body weight. Kerry injected 1 gram of Endrate into a child weighing only 42lbs.

You have to dilute it properly – no more than a three per cent solution. According to Kerry, We diluted it 1:1 with saline. That is a fifty percent solution.

You never give an IV push of Endrate to children. The label recommends a minimum of three hours for an infusion. Kerry gave an IV push lasting 5 minutes.

Started the IV with saline. After a good blood flow in the right antecubital fossa with 3 other assistants and his mother controlling him and the papoose board. Had a good IV return flow. We then introduced the EDTA. Checked return flows frequently during administration. Gave the IV over approx 5 minutes. Then rinsed with saline. He had no difficulty toleration (sic) it.

No difficulty tolerating it with 4 adults controlling him and a papoose board! 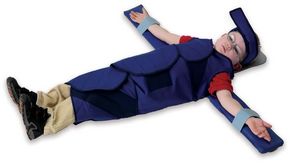 The Pennsylvania Board document sheds light on ARI/DAN’s invovement in this tragedy. It quotes from Abubakar’s patient chart, written by Roy Kerry,

But we have been in communication with Dr Usman regarding EDTA therapy. He apparently has a very high aluminum and has not been responding to other types of therapies and therefore she is recommending EDTA, which we do on a routine basis with adults.

Meanwhile DAN! has further mired itself by admitting Kerry to a DAN! conference after he killed Abubakar, and, on completion of its eight hour, intensive medical training, registering him as a DAN! practitioner!! Just in case you think this is an unfortunate oversight on their part, please check out the case of Dr Schwartz, the chelationist with the Holistic Resource Center in Agoura Hills, California who is also DAN! certified and also uses Endrate, the drug that killed Abubakar.

We are not dealing with a medical error here. Kerry did not use the wrong chelator. There is no right chelator for autism. Chelation is quackery, plain and simple, and it extends far beyond the practise of Roy Kerry. DAN! is the largest organization that promotes “alternative” therapies for autism. Its uncritical endorsement of chelation places it firmly on the side of quackery. DAN! protocols and DAN! practitioners are as culpable as Roy Kerry for the death of Abubakar Tariq Nadama.

On Tuesday 23rd August 2005 Abubakar Tariq Nadama died while being given an IV push of disodium EDTA in the office of Dr. Roy Eugene Kerry in Portersville, Pennsylvania.

Abubakar was five years old and autistic. His death prompted me to write a discussion document on biomedical interventions which I sent to the National Autistic Society. The document was published in the NAS magazine “Communication” and is the earliest entry on this blog.

The circumstances surrounding Abubakar’s death were the source of some confusion. According to Mike Fitzpatrick the Times reported that his parents had taken him to America to be chelated for mercury poisoning. The Pittsburgh Post-Gazette reported that

Authorities said Kerry’s office reported that the child was receiving an IV treatment for lead poisoning when he went into cardiac arrest.

Wade Rankin tried to clear up the confusion when he commented on Random John’s blog:

Many autistic children have tested high for lead toxicity, leading to the hypothesis (and forgive me for oversimplifying this) that their mercury-damaged immune systems are even more at risk for lead exposure than a typical child. In any event, very positive results (i.e., alleviation of some problematic symptoms of autism) have been reported after chelation for lead as well as mercury. It is generally believed that Abubakar Nadama was one such autistic child, and it now appears that the real problem was the doctor’s unexplained failure to use the correct form of EDTA.

Whether or not you agree with this hypothesis a follow up report in the Post-Gazette seemed to confirm that Kerry had indeed administered the wrong drug.

One of the nation’s foremost experts in chelation therapy said she has determined “without a doubt” that it was medical error, and not the therapy itself, that led to the death of a 5-year-old boy who was receiving it as a treatment for autism.

Dr. Mary Jean Brown, chief of the Lead Poisoning Prevention Branch of the Atlanta-based Centers for Disease Control and Prevention, said yesterday that Abubakar Tariq Nadama died Aug. 23 in his Butler County doctor’s office because he was given the wrong chelation agent.

“It’s a case of look-alike/sound-alike medications,” she said yesterday. “The child was given Disodium EDTA instead of Calcium Disodium EDTA. The generic names are Versinate and Endrate. They sound alike. They’re clear and colorless and odorless. They were mixed up.”

Just for the record Dr Brown’s use of word order is misleading here. The trade name for Disodium EDTA that killed Abubakar is Endrate. Versinate refers to the Calcium Disodium EDTA. I would hate for anyone else to repeat Kerry’s so-called ‘mistake.’

Essentially, Tariq died from low blood calcium. Without enough calcium — a metal — in the blood, the heart stops beating. Dr. Brown said the Disodium EDTA the child was given as a chelation agent “acted as a claw that pulled too much calcium” from his blood.

“The blood calcium level was below 5 [milligrams]. That’s an emergency event,” she said.

Despite claims at the time of Abubakar’s death that nobody had died as a result of chelation since the 1950s the Post Gazette continues:

Dr. Brown said the same mix-up happened in two other recent cases: a 2-year-old girl in Texas who died in May during chelation for lead poisoning and a woman from Oregon who died three years ago while receiving chelation for clogged arteries.

Dr. Brown said that in each case, the blood calcium level was below 5 milligrams. Normal is between 7 and 9.

The correct chelation agent — Calcium Disodium EDTA — would not have pulled the calcium from the bloodstream, she said.

“There is no doubt that this was an unintended use of Disodium EDTA. No medical professional would ever have intended to give the child Disodium EDTA,” Dr. Brown said.

But was it just a medical error? A number of people, all better qualified than I, have commented critically on Dr Brown’s remarks. See for example The CDC Flubs It, Another Perspective on Abubakar Tariq Nadama, Death by Chelation Revisited and Misattributing CAM Errors.

Now that Kerry is finally facing disciplinary action for professional misconduct (no criminal charges have been made to my knowledge) he is still being charged with medical error for using the wrong drug. I agree with Orac up to a point when he says:

No, no, no. The use of chelation therapy to “treat” autism that leads to serious complications should be sufficient cause in and of itself for action. The formulation used isn’t the issue (although certainly Kerry was reckless and incompetent in choosing disodium EDTA). The use of a non-evidence-based, ineffective, and potentially dangerous treatment is. Couple that with Dr. Kerry’s apparent cluelessness in giving the “wrong” chelation agent and you have a recipe for disaster. It’s hard not to conclude either that Dr. Kerry is a quack using potentially dangerous and unproven treatments for autism

And this is the point.

or that he’s an incompetent doctor who, in trying to use a relatively safe but unproven and almost certainly ineffective treatment for autism, screwed it up and used the wrong chelator, leading to the death of a child.

A recent article on Autism Street makes it quite clear that Kerry did not “screw up.” As a member of ACAM, the American College for Advancement in Medicine, Kerry chose Disodium EDTA, the drug that killed Abubakar. It was not an error because Disodium EDTA, aka Endrate, is the only drug clearly identified and recognized in the chelation protocols published by ACAM. Thanks to Autism Diva who published a letter from Dr Gary Gordon, one of the founders of ACAM, who supplied the Endrate to Kerry, which said:

I have only checked to see if they ( Edit: that is Kerry and his partners in crime) have ever purchased Calcium EDTA

and found the answer was

I hope the Pennsylvania authorities read Autism, A Killer App., And A Drug Of Choice – Guest Blogger and I suggest you all read it as well. And please visit Bartholomew Cubbin’s blog. His commentary is a very good introduction to a complex subject.

The Posautive Group on YouTube is an excellent source of short videos about autism. But I have just seen a remarkable video that manages to inform and educate in just 90 seconds.

I learned about it on the National Autistic Society website

Thora Hands and Andrew Welsby are parents of children with Asperger syndrome. They made a very short film called ‘Magical Thinking’ which has just been shortlisted for the Depict! 2006 short film competition, part of the Encounters Film festival in Bristol in November.

“The film is about a child with autism, who finds a mechanism to help him cope with an overwhelming sensory world of people, places, sights and sounds. The film is based on our experiences with our two children, both of whom have Asperger’s and one also has Tourette’s. Our film is very much a team effort; I wrote, my partner filmed and edited, our kids star, and one of our boys with AS narrates (wonderfully, I might add).

“This being one of our first film ventures, we are obviously delighted that the film has been shortlisted. If we are lucky enough to win, we plan to make a donation to your organisation who have helped us so much over the years in various ways.”

One or two reviewers complained that they found it difficult to tune in to the narrator’s Scottish accent. I thoroughly enjoyed Magical Thinking, and i hope you do too.